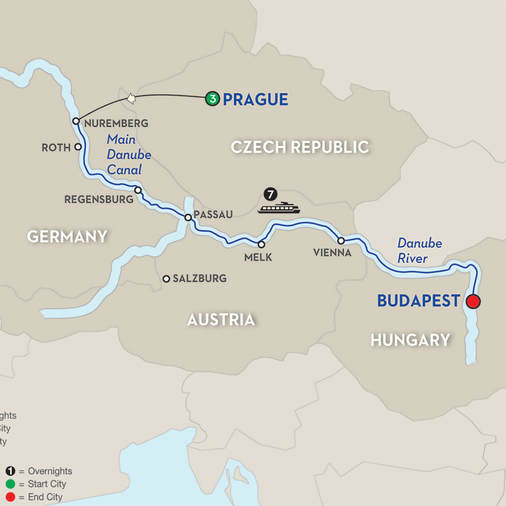 "What entices you most about a river cruise through Central Europe? Does visiting historical sites pique your interest? How about architecture preserved from the 14th century or cities virtually untouched since Roman times? Maybe it’s walking down narrow cobblestone streets lined with beautiful Patrician houses or enjoying Germany’s famous beers? From Prague to vibrant Budapest, this Danube river cruise vacation takes you to four countries. And the scenic beauty along the way as you cruise past quaint towns can be experienced right from your stateroom or while sipping wine atop the Sky Deck of your ship.

Enjoy three nights in Prague, one of Europe’s most beautiful cities. Stand in front of Old Town’s medieval Astronomical Clock, which amazes as an intricate art piece and visualization of time unlike anything else in the world. Travel to Nuremberg, Germany, to board your river cruise vessel docked on the Main Danube Canal and visit this thousand-year-old city with a Local Guide. Next, reach Regensburg, the only German city not bombed during WWII. Lovers of architecture will enjoy the many listed buildings of historic interest, and Porta Pretoria, gates to an ancient Roman fort built in 179 AD. Passau, known for its narrow, winding streets, offers the magnificent Italian baroque St. Stephen’s Cathedral. In Melk, you will visit Austria’s majestic Benedictine Abbey, one of Europe’s largest monasteries, which sits high on a bluff. Take in the breathtaking views before continuing through the picturesque Wachau Valley to the romantic sounds of Vienna, the “City of Music.” 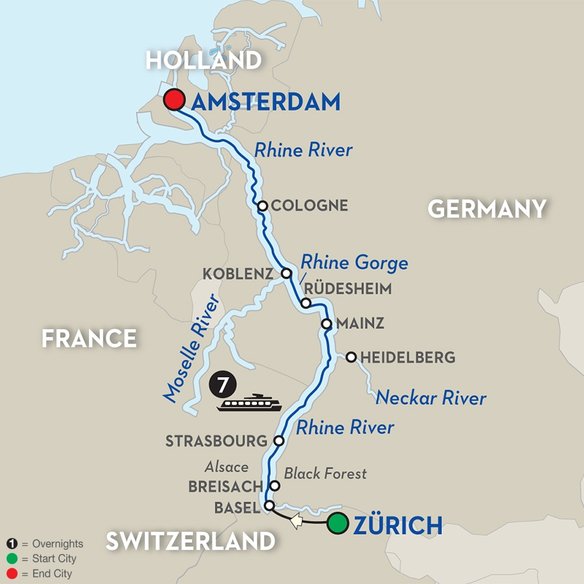 Make the most of your holiday season with a festive river cruise experiencing European Christmas Markets!

2018's Departure Information:
"One of Europe’s most legendary rivers awaits you on this winter wonderland journey along the Rhine River, which starts in Switzerland with stops in France, Germany, and Holland! Each town is festively lit and decorated and strains of Christmas carols fill the air.

Board your vessel in Basel, Switzerland, then head for Breisach, Germany, the gateway to the Black Forest, an area of unrivaled natural beauty, best known for Black Forest ham, cherry cake, and the cuckoo clock. Here’s your first chance to explore a Christmas market offering many traditional items. Continue your river cruise to Strasbourg, France, where you’ll visit the red-sandstone gothic cathedral with ancient murals and fascinating astronomical clock. Strasbourg is home to one of the oldest and finest Christmas markets in Europe and its centerpiece is a giant Christmas tree. Visit the ruins of Heidelberg’s castle, towering magnificently over the city, and watch the skaters on the ice rink below. Stop in Mainz for a guided walk and visit the captivating Gutenberg Museum. Next up is the charming wine town of Rüdesheim, and unique Siegfried’s Mechanical Musical Instrument Museum. You’re sure to be enthralled by the life-size figures of Europe’s largest nativity scene on the Market Square. Pass through the dramatic Rhine Gorge before arriving in Cologne—your last stop in Germany. Here, you’ll explore the 2,000-year-old city known for its gothic architecture and famous twin-spired cathedral. Wander through the Christmas market, try some traditional Lebkuchen and get some inner warmth with a cup of Glühwein.

As an exclamation point to this wonderful Rhine river cruise, you’ll spend time in Holland’s popular, modern capital of Amsterdam. The best way to see the treasures of this 700-year-old city is on a canal cruise along the elegant grachten lined with homes dating back to the city’s “Golden Age.”

To inquire about availability or pricing, email Avery, avery@vikingtravel.com.
Click here to shop all itineraries